Stanley Market › Getting there › From Admiralty

To Stanley Market from Admiralty 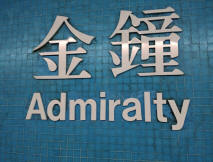 Admiralty, on the north coast of Hong Kong island, is something of a transport hub and a convenient place to change MTR lines. The MTR station is called Admiralty Station.

The district is more passed through than visited, though there are a few things which may interest the visitor; such as the entrance to Hong Kong Park, and the Pacific Place shopping mall.

Buses to Ocean Park also leave here, and at the end of the day deposit their loads of weary park travelers. Apart from this it is more an office district with the Queensway Government Offices and the Lippo Centre towers disgorging large crowds to eat in the many lunch restaurants jammed into the arcades. 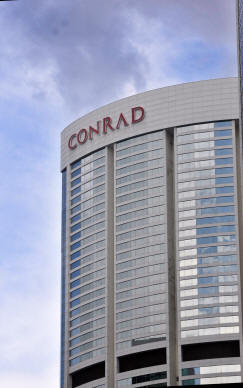 There are four  large luxury hotels above and adjoining the Pacific Place arcade. Three are major chain hotels with everything you would expect, the Island Shangri-La, the Conrad, and the Marriot while the third, The Upper House, a locally designed boutique hotel of 100 rooms.

But if you are staying in one of the luxury hotels here, or you have had to visit the British Consulate which is located high up the hillside above Admiralty, then you may wish to know how to get to Stanley Market from Admiralty.

There are a number of options but Taxi, public Bus and Green Minibus are the best choices. Walking is not an option unless the 3 hour hike over the hills is really what you want to achieve, and while the views and paths are sometimes interesting you would arrive perhaps rather too weary at the market to enjoy it!

If you don't like Tunnels then  you can ask your taxi driver to go via Peak Road, over the hill.  This may even be a few minutes a faster when the tunnel is congested, and you don't pay a toll, but the road is extremely windy in parts and not good for those who get motion sickness.

Air-conditioned, modern, double decker and slightly scary on windy roads the public busses of Hong Kong are an excellent option.

Prices vary by route but are mostly less than HK$10 per person, with half prices for children. So even for a group of five, which is the maximum allowed into a Taxi,

The route  66 to Stanley Plaza is also ok, but will involve 15 minutes walking after you arrive.  From the Stanley Plaza stop you should enter the plaza and take the escalators down to the lower entrance.  It is then a short walk along the waterfront to the market.

The green minibuses (GMB) are small, with only 16 passengers, fast and affordable.

Unfortunately there are no minibus routes directly from Admiralty to Stanley, but you can take the MTR to Causeway Bay and then take the GMB 40 from there.

With the opening in 2017 of the MTR South Island Line it is possible to take the MTR from Admiralty Station through the central hill of Hong Kong, mostly underground.  Get off at the above ground and open Ocean Park Station then it is just a a few minutes walk to the stop for the GMB 40. But without proper pavements this is not particularly safe or convenient.

So although this is a possible route it isn't recommended because of the confusion of the interchange and the fact that there isn't a view for the first half of the trip.