Murray House is a restored Victoria-era building (1844) that was named after Sir George Murray (1772-1846), a British soldier and politician.  Architectural design was done by Major Aldrich and Lieutenant Collinson of the Royal Engineers, who actually did the construction.

In 1982 it was dismantled to make way for the Bank of China Tower which now sits on the original site.  It was finally reassembled in it's present location in Stanley behind the end of Stanley Main Street, on the right-hand side of the bay during the years 1998/1999.

The Victoria-era building served originally as barracks for the British military and was part of the Victoria Barracks up until the 1960s.

Today it houses restaurants on the first floor, some of which have grand views across the bay. 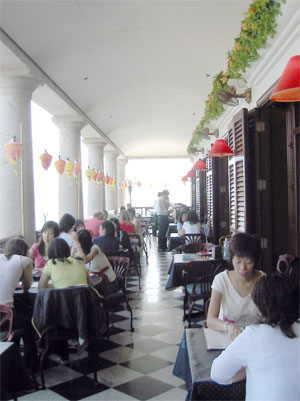 I have placed a simple model of Murray House in the Google Earth 3D Warehouse.  You can find it here.

Outside on the water front is the similarly relocated structure called Blake Pier.